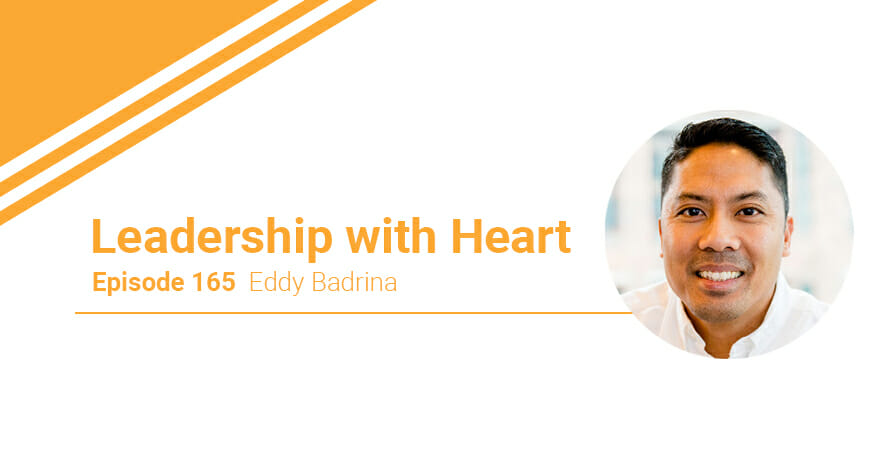 In this episode, Heather interviews Eddy Badrina, CEO of Eden Green and Co-founder of Buzzshift. This 20-minute podcast is filled with insightful information about his innovative company Eden Green and what it takes to be a leader. Eddy attributes most of his leadership values to his parents, who immigrated from the Philippines with little to their name and made a life for themselves in Houston, TX. From a young age, Eddy was shown what he refers to as “sacrificial leadership” by his parents who would send over 50% of their income back to the Philippines..

Eddy Badrina has an impressive background which includes working in President Bush Sr.’s administration and being a co-founder of Buzzshift. Now as a CEO, he is the most essential leader of the company and in this podcast, he shares with us the knowledge he has acquired over the last 20 years.

Before Eden Green, Eddy co-founded Buzzshift, a digital strategy agency, and also worked for many years in the US Department of State with various leadership roles. He graduated from Texas A&M University and the Bush School for Government and Public Service. Eddy has over 20 years of experience in growing organizations and leading teams.

If my leadership journey was a marathon I like to think that I’m probably in mile 13 or 14, I’ve hit my pace and now I’m just trying to improve with every mile. Good leaders don’t ever compare themselves to others, and I don’t like to be visionary or futuristic, I just work on becoming better than I was yesterday

In a marathon, I’m probably in mile 13 or 14, I’ve hit my pace and now I’m just trying to improve with every mile. - Eddy Badrina #leadershipwithheart Click To Tweet

Where I Learned How to Lead

My parents came to America from the Philippines with little to their name and they were able to slowly establish themselves in Houston, and establish leadership positions within the community. I watched them do this as they worked, and as working immigrants, they would send over 50% of their income back to the Philippines while still maintaining their own household. I learned how to be a leader by simply watching my parents live their everyday lives.

Ethical Roots to His Company

I joined the company in 2019, and what I really fell in love with was the reason why they wanted to create this business. The founders are two brothers from South Africa, and one year they were passing out food at a South African fair when a five-year-old boy came up to them and started hoarding all the candy. At first, they were confused, and let the little boy know that there was more candy – and that there was no need to take it all at once. The little boy replied with “ this isn’t for me it’s for my sister, today I don’t eat”,  and that was when they realized that there were still children in the world that we’re not eating. Both of the brothers are engineers and they came up with this idea of having a more economical and environmentally friendly approach to farming, and when they approached me with the idea I just couldn’t say no.

Connect with Eddy on LinkedIn